While perusing through my Shyzer e-mail account the other day, I wound up skimming through my junk folder looking for a verification e-mail that unluckily and incorrectly was flagged as spam. I wasn’t really paying attention to what all the other subject lines read, but then I noticed Favre’s name out of the corner of my eye. And what, is that Mandela beneath his? Wait a minute… 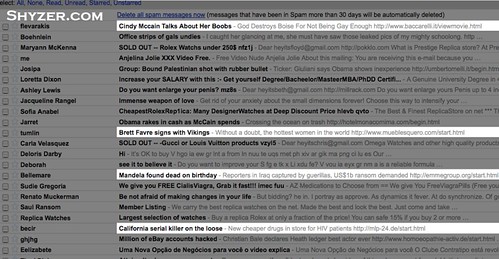 Now let’s break this down. In the span of 25 messages or so, we get the following headlines:

Who are they targeting with these?! On my list of people I want to hear and/or see talk about their boobs, Cindy McCain is at number Eleventy Billion, right between my mom and Barbara Walters.

Favre signing with the Vikings is obviously tailored towards me, but why in the world would I want to read something about that? My first reaction to such a headline would be to vomit in the nearest trash can, not open the damn e-mail. And what do they expect me to do upon realizing it’s just spam for a Viagra knockoff? Feel so relieved that I want to rewards myself with a prolonged erection?

Mandela dead on his birthday? What the hell? Why drag the name of one of the world’s most respected men into this debacle? Although I’d be willing to bet most people think he’s already dead, so what percentage of the public would this be effective on? 10%? Lower?

And finally, the serial killer running amok is a nice page out of the major media playbook. “Tonight at 11, tune in to find out what will likely kill you and your entire family before dawn. Also, Skip brings you the latest sports highlights and Phil has the weather!” Lucky for me, I don’t live anywhere near California. So unless he gets a wild hair up his ass and decides to go on a roadtrip, I think I’m safe.

EDIT: I just checked my spam folder again and found these two nuggets of awesome: “Bodyguards Positioned Outside Jolies Vagina” and “Senator John McCain Wishes To Have Sex With Model Heidi Klum; Others” – HAHA. The mental image of the first one totally makes it and the second one only turns awesome with the addition of “others.” Oh come on, tell me! I feel like it’s that news tease all over again!