Would you hire a company called Goob Inc? Yeah, I probably wouldn’t either. Though if you do a google search for that very company, you’ll come across a newly created website with such a name. In addition, there’s a Daily Goob out there, an impostor on Hey, It’s Free commenting with the name Goob, and of course Goob.com. Countless new Facebook sites have also cropped up, thanks mainly to Facebook’s new Applications feature. Throw in the fact that there’s some dude in Canada named Mark Shyzer who makes shirts or something and I think we can all agree that there is nothing but one conclusion to be made.

We here at Shyzer are under attack. Counterfeit Facebook, Shyzer, and Goob forces are massing under the cover of darkness for what can only be interpreted as an invasion force. Before long they’ll launch a sudden air strike against my ranking on Google for Goob. Our intelligence indicates they’ll then quickly shift the brunt of their attacking hordes to focus on Shyzer in an effort to decapitate us in a quick and sudden blow.

But we’ll be waiting for them. Oh hell yes, we’ll be ready. Just like last time. 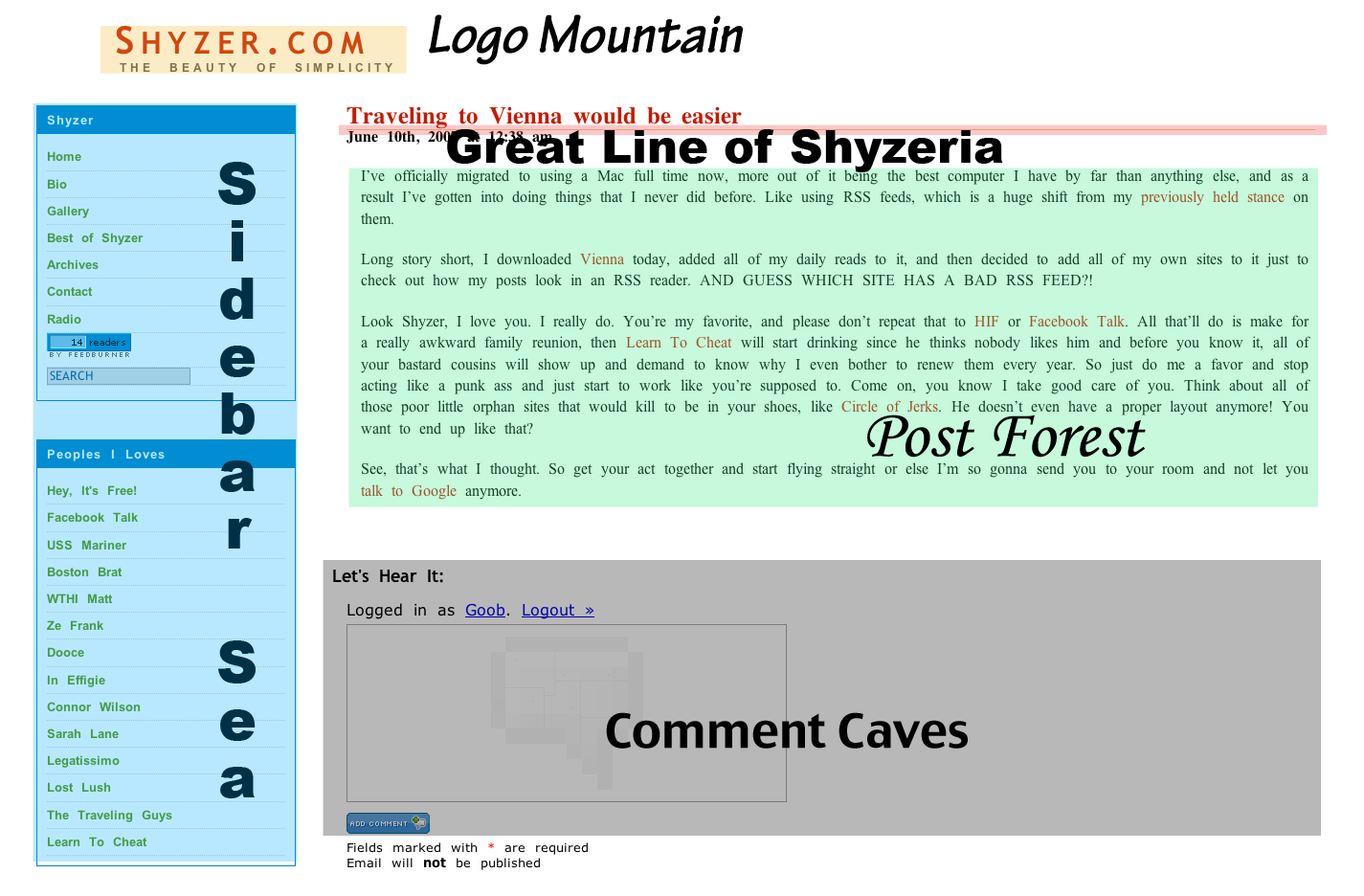 Records and details are sketchy and the only remaining artifact is the ancient map above, but over time we’ve managed to piece together a history of the first Great War. We also suspect the oncoming one will follow a similar path. The first Battle of Goob occurred somewhere near the northern borders. The newly formed nation of Shyzeria set up defensive positions along the barren landscape, with the combined armies of HIF and Shyzer dug into defensive trenches around the Great Line of Shyzeria and the naval armada of Hey, It’s The Forums patrolling Sidebar Sea to the west. Approaching southward, the wretched and fully armed division of Goobdemort had no choices but to attack head on. Though heavily outnumbered and out gunned, the defending Shyzeria regiment valiantly held off wave after wave of the oncoming swarm in spite of the widely known secret that no replacement forces would soon arrive for either the dead nor the weary.

After more than a week of heavy fighting, a Goobdemort scout spotted a weakly held stretch of the line and it wasn’t long before at least two Goobdemort brigades flooded towards the spot. As they near approached, even they were surprised at the sparse resistance they faced and thanked their God for such a blessing. As they began to cross the line, a sudden and massive barrage of Shyzeria’s long ranged naval artillery slammed their exact spot and surrounding area in a brilliantly timed and executed ploy. Goobdemort’s leaders quickly realized they had fallen prey to an ambush and ordered a hasty retreat, none too soon either, as Shyzerian forces began attacking from nearly every side. Though badly wounded and having lost the bulk of their original army, Goobdemort’s troops were soon thrilled to see that their leaders had called in yet another division of men to help crush and demoralize the remaining puny Shyzerian resistance.

It didn’t take much longer for Shyzeria’s leaders to see that the northern lands were all but lost. After 18 days of bloody battle, they knew their forces could not repel yet another wave of enemy attackers. Thus they ordered a full retreat westward around Post Forest, down the coast of Sidebar Sea, and into the Comment Caves. There, they would make their last, and probable futile, stand against the evil throng.

As the twilight began to fade that evening, Shyzeria’s forces surreptitiously crept away from the front lines and began the long march southwestward. Yet it wasn’t long before Goobdemort’s spies noticed the hasty retreat and ordered a ruthless pursuit. With Shyzeria’s anti-air guns having been dismantled and loaded onto trucks for the retreat, Goobdemort’s air force found they were free to scream down and unleash hell upon the hapless Shyzerian army. Throughout the night, Shyzeria suffered almost insurmountable losses and as dawn fast approached, Shyzeria’s leaders debated whether or not to halt their flee and make a stand against the pursuing force. However, just as they were about to order issue their new orders, a runner approached from the west with Earth shattering news. Shyzeria’s navy had not only been obliterated the previous night by Goobdemort’s attack submarines, but far off on the horizon, troop transport ships had been spotted. Sullen and dejected by the horrendous news that they no longer travel south along the coast, much less stop and make a stand, they ordered all remaining forces to immediately enter Post Forest.

As Goobdemort’s leaders watched the last of Shyzeria’s dejected men slink beneath the cover of the thick forest, they halted their advance and once again reveled in their good fortune. For now their enemy was trapped in the thick overgrowth of the woods, meaning Goobdemort’s army would be able to swing down the coast and arrive first at the caves. In only a few days, they’d have their enemy flanked on all sides with no chances of escape remaining for the cowardly Shyzerian forces.

Yet the leaders of Shyzeria weren’t stupid. They quickly saw what Lady Luck had delivered to them and unanimously decided their only chance of survival was to send out messages to any of their sympathetic allies who might remain. Runners were sent out in all four directions with the prayers that one might be able to slip undetected through Goobdemort’s perimeter and bring back any aide they could round up. And with no other plays remaining, Shyzeria’s forces regrouped and began to slowly hack their way through the thick brush towards the Caves.

10 days passed before Goobdemort’s wicked forces had completely surrounded the forest. Their leaders became irritated with waiting for whatever was left of the opposition to emerge from the woods and so began to march their men northward. Meanwhile, Shyzeria’s remaining rag-tag forces resembled those of a weak militia more so than of an army. Weary from having marched almost non-stop for over a week, they geared up for what they rightly believed to be their ultimate battle. As talk of surrender began to creep into the serious discussions of even the highest ranking members of Shyzeria’s military, the unmistakable sounds of Goobdemort’s thugs began to flood the forest. Scouts clambered up to the tree tops and reported that they were not far from the Shyzerian’s thinly held defenses.

The Shyzerian soldiers were ordered to promptly find cover and lie in wait. Having left every resemblance of heavy artillery far behind in their journey, their only prospect was to allow as many of the evil fiends to invade their camp before unleashing a sneak attack on them from the trees and brush in the hopes of taking as many of the heinous bastards to the grave with them.

As the Goobdemort troops moved deeper into the forest, many of their numbers unknowingly found themselves within striking distance of a Shyzerian gun. Yet the order to halt was abruptly shouted by their leader, as his radio began to squawk with broken and confusing pleas for help. As fate would have it, a Shyzerian Marshall was within earshot and instantly realized what was happening.

For at that very moment, a division of heavily armored cavalry from Facebook Talk came thundering over the ridges of Logo Mountain and smashed practically unopposed through the rear Goobdemort reserves and supply lines. As the Marshall raced to calculate how this luck of gigantic proportion changed his men’s current situation, the Goobdemort airwaves again lit up with shrill cries of even more enemy forces. The Marshall could hardly believe his ears and for a moment, he froze with disbelief. He did not believe in such amounts of luck and good fortune. Yet as he crouched under the thick shrubbery and felt the ground beneath him gently rumble from far off explosions, his mind sprang to life and toyed with the idea of not just survival, but actual victory.

Three nights prior, a beaten and haggard looking man was intercepted near the borders of the distant, long forgotten, and now rouge nation state of Shyzer Network. Not accustomed to accepting foreigners kindly, the Shyzer Network guards immediately demanded the messenger turn around and leave if he valued his life. Yet his persistence of a counsel with the nation’s leader, despite the potential threat to his life, impressed the guards and they escorted him directly to their nation’s capital. Once there, the emissary explained in great detail the ongoings of his home nation to anybody who would listen. It didn’t take long for the leaders of Shyzer Network to become romanticized with the idea of saving their once close brothers of Shyzeria from certain doom. They immediately dispatched their entire army to make haste for Shyzeria and with it, to carry The Bomb.

And so, as the distinct mushroom clouds rose over the tree line, the Shyzerian Marshall let slip a tear of joy. The entire Goobdemort’s navy, along with the invasion force brought with it, had in the blink of an eye been eradicated and the Marshall knew that every man in the forest was coming to that same realization as they slowly gazed upward. Not wanting to give the enemy time to comprehend this sudden change of events, he boldly shouted to attack and the boscage erupted with the sharp crack of gunfire and explosions.

To say that Goobdemort’s troops were caught by surprise and unprepared for what followed would be an understatement. Surging with new found confidence and bravery, the Shyzerian troops unleashed their fury and rage in a massive and sudden outburst of force. Soundly routed, uncertain of what to do, and having no idea exactly how few Shyzerian troops were attacking them, the enemy fled from the woods and back to the safety of the nearby caves. But the Marshall refused to allow the enemy to escape while his men basked in the glory of their victory and so he led his men in full pursuit right to the mouths of the caves.

Over the next few days, the remaining Goobdemort villains launched countless unsuccessful attacks on the Shyzerians guarding the only exit. It wasn’t long before they watched in horror as the Facebook Talk and Shyzer Network troops arrived to bolster the defenses. Dangerously low on ammo and supplies, heavily outnumbered, and with moral beyond repair amongst the troops, the Goobdemort leaders offered terms of unconditional surrender to Shyzeria.

And thus ended the First Great War. Or so the ancient legends go. Personally, I think they’re just the ramblings of somebody who watched a few too many war movies last night in an effort to get his mind off the upcoming final Harry Potter book.

(Clayster and I are probably the only ones who get the title of this post, but if you should care to join in on our laughter, watch this YouTube video.)