Every time I blow out some birthday candles, flick a penny into a fountain, or send my eyelash floating into the air, I wish for the same exact thing. I tightly close my eyes and silently say to myself “Please, I wish that when I die, I have no regrets.”

For years, I always decided not to do something and blamed it on something else. In most of those situations, I wasn’t really lying to myself. I held back or quit because I had other obligations that I wished to attend to first. My family, my relationship, or just plainly myself always seemed to be used as an excuse more then anything else and I knew that something was awry. I soon realized that I was afraid. I’m not one to scare easily. Besides Laura Bush’s face, I can’t think of anything that really scares the bejesus out of me. Roaches gross me out and yellow teeth are kind of freakish, but I can’t say I’m scared of them. Some people, however, are scared of words. Love, Hate, Defeat, Unrest. The list could go on and on, but you see what I mean. I never thought of myself as one of those people, but over time I’ve grown to realize that I guess you could say mine would be Rejection.

Call it the perfectionist in me. I hate being told I’m not good enough for something. I’ve never been one to desire Mastery in subjects. Instead, I’ve always wanted to be that Jack-of-all-trades type guy. The kind of guy who could install your air conditioner and cook up a souffle without breaking a sweat. I’ve also never really cared about being accepted in 99% of the things I do, which seems to backfire when I finally find something that I actually do want to do. By only leaving myself that small sliver of activities I wish to be accepted in, I force myself to master those areas just to avoid the rejection. And the 99% is no exaggeration. Hell, I’ve never even asked a girl out until recently. Not from the fear of rejection straight up, but from the fact that when I finally find a girl that I am completely compatible with and interested in, I put myself in the position to where I don’t even have to ask, it just happens. I try and perfect that art of asking her out to the point where no just isn’t an option and quite frankly, all of this perfection has begun to annoy the living hell out of me.

So as I was laying in bed the other day, I began to grasp the fact that I do have some regrets. My hesitation and laziness in the past only seemed to add to my regrets, and therefore, I set out to remedy as many of them as I could. I was fully aware that some of my past mistakes couldn’t be fixed, but damned if I wasn’t going to try.

One of the biggest bonuses with hanging out with Lee, Tucker, Fitz, Phil, and all the other guys is that there is always enough to play a full game of baseball every Saturday afternoon. I don’t think I can convey to you the amount of joy I find from jogging out into the outfield and catching anything hit my way. The feeling of slapping a ball just over the head of the shortstop or crushing the ball into the gap to score the tying run are feelings that can’t be forced. God, I miss playing baseball. After playing last fall, I finally reminded myself of how much I enjoyed it and I’ve gotten to the point now where I’ll go out during the late hours in the afternoon just to try and find a game going on somewhere. Usually I can get in on them, but I want more. I found an almost semi-pro league (18+, fast pitch, actual baseball rules, pitchers throw around 70 MPH) down in Charleston that runs through the summer. I had a slot wide open for me, but with no job or housing set up for me, I had to turn ’em down. Wherever I go this summer, I have got to find a league to play in. I don’t see how I can be happy without it.

My best friend from high school Elton studied abroad in Chile last semester and after talking to him about his trip, I couldn’t believe that I had yet to take advantage of the opportunities I have. I always wanted to go somewhere, but I either missed the deadlines, or decided against it because of where I was in my life. So it feels good to say that I’ve been accepted to study abroad next year. Seeing as how it’s going to be my senior year, I had to ask for a few favor and exceptions to be made, but it looks like all that is left is picking the country and forking over the money. I’ve been debating over it for the past week or so, and I think the finalists are Australia (how could I not want to go back?), Italy (The culture, the climate, the location – what’s more to ask for?), and England (Can’t really go wrong with England. Plus I’m a sucker for British accents.) I’ve still got to make up my mind, get the loans approved, etc. But I have no intentions of backing down and quite frankly, I couldn’t be more excited.

And finally, I reversed yet another factor in my life today. Two Valentines Days ago, I decided to grow my hair out since Jess loved long hair. So it has been over 14 months since I cut my hair. And as you all know, the last time I shaved my face was on Halloween, so I had collected a nice sized beard. Yet I was tired of waking up in a pile of my own hair. I was tired of pulling out a clump of hair whenever I ran my hands through it and I was tired of never being able to see my face. So, that all changed today… 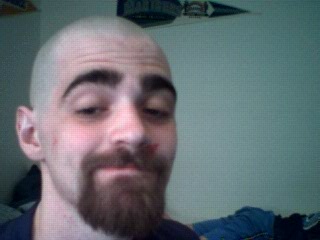 The finale to this series will be posted within a day or two, and then we’ll be back to our regularly scheduled ramblings that aren’t personal, since I know this has to be boring most of you to death. I have quite a few topics to post about (My now infamous nil with the ace of spades, The Brothers venture down here, The Dark Side of The Moon coupled with The Wizard of Oz, and much much more) so don’t give up on me just yet.